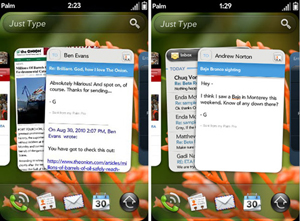 In the view of this humble writer, WebOS is far and away the best operating system out there. For phones. I’m still on the fence about WebOS on tablets, so the news that HP plans to put WebOS on all of their PCs in 2012 is especially curious.

Speaking with HP employees, company CEO Leo Apotheker said that Hewlett-Packard had “lost its soul,” and one of the many things the company needs to do to find it is to focus on software as well as hardware. This would include bringing webOS to some PCs in 2011, and every HP PC by 2012.

I’ve used WebOS sparingly, mostly on friends devices. It’s a snappy little operating system that I think could work well with Netbooks, where Windows has been having some problems. If anything, should HP bring WebOS to Netbooks I would think their biggest rival would be Google with their Chrome OS.

Being an HP notebook owner, I do wonder if HP will make WebOS available for those of us who have “older” machines (mine is only three months old). Regardless, this seems to be a calculated decision to try and increase the exposure people have to the WebOS software and maybe, just maybe, it’ll help drive interest for the HP tablets and smartphones.