Having Fun With Google Maps 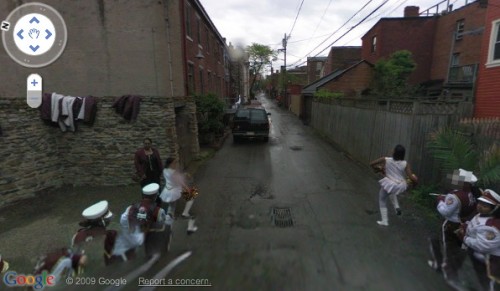 Seeing the Google Street View car in your area is nothing new. But what happens when you team up with said Street View team and act out weird scenes on your street? That’s what residents of Pittsburgh, PA did when the cameras came a’flashin’ down Sampsonia Way:

On May 3rd 2008, artists Robin Hewlett and Ben Kinsley invited the Google Inc. Street View team and residents of Pittsburgh’s Northside to collaborate on a series of tableaux along Sampsonia Way. Neighbors, and other participants from around the city, staged scenes ranging from a parade and a marathon, to a garage band practice, a seventeenth century sword fight, a heroic rescue and much more…

I’ll be honest, though. I didn’t really see all that much except for the sword fight and some dude in a weird costume. Did you spot the garage rockers? Am I just going blind?