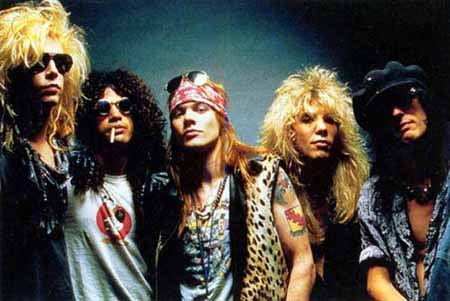 If you’re a fan of Guns N’ Roses, it’s more likely than not that if you aren’t the guy signing Axl Rose’s non-existent checks then they hate you. They all hate you. Yes, even Slash hates you. Remember that blogger who leaked their latest suckfest, Chinese Democracy? That was an honest mistake any fan could have made. Well, now he faces a long term of jail time for simply being a fan and helping to promote Guns N’ Roses.

They sure needed it according to Eric Garland of BigChampagne, a company that tracks file sharing activity. Garland brings to light the fact that no file sharing of Chinese Democracy ever took place until Kevin Cogill leaked it and then got arrested. Since his arrest, Chinese Democracy has become the whore of torrent downloading.  The question on my mind is why is the FBI wasting time with this and what does the band think of Kevin? Scratch that, no one really cares what Guns N’ Roses thinks.