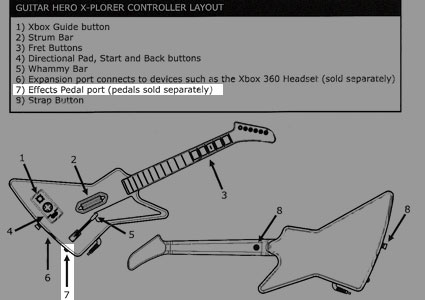 Thanks to an early shipment of Guitar Hero II for Xbox 360, there’s now hard evidence to confirm that Guitar Hero is adding the use of an effect pedal to the game. A diagram of the guitar controller in the 360 instructions shows a plotted port for an effect pedal. Before you get your gaming panties in a knot, take warning that Konami has been known to add mysterious effect ports to music games in the past without anything to show for it, which they did for Beatmania III.

On the back of this instruction slip, the effect port is labled as still being unavailable for now, as can be seen by the lack of hardware. But Konami might just have something up their sleeves. — Andrew Dobrow