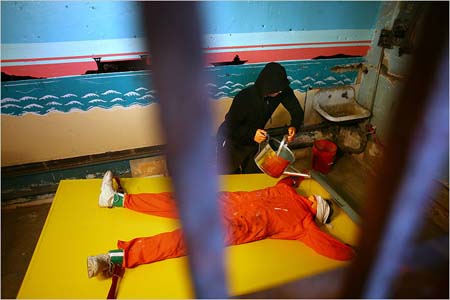 Have you been to Coney Island lately? It’s the prime spot for carny games and funnel cake. Now, it’s got even more appeal, with robots acting out the infamous torture technique of waterboarding. It’ll have you running in terror as if you’re being chased by a creepy old man bot. Artist Steve Powers opened the “Waterboard Thrill Ride” on West 12th Street in Coney Island not just for profit and laughs but for a deeper meaning.

I bet you’ve never witnessed a Guantánamo Bay interrogation: a creepy figure in a dark sweatshirt acts as “executioner” as it leans over another figure in an orange jumpsuit, its face covered by a towel and its body strapped down on a tilted surface. So, is it a haunted house or what? Steve Powers explains:

Good point, Mr. Powers. Waterboarding is just as much torture as leaving someone alone in a dark room with a Nokia N-Gage.