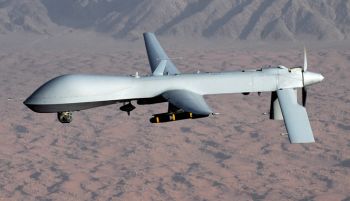 According to MSNBC, the future of war will have private robot armies duking it out in epic battles.

However, I think we all already knew that.

This brilliant prediction comes as a result of NATO’s Libyan commanders asking the Pentagon for more Predator drones to help with their reconnaissance missions. According to them, “It’s more difficult to find stuff to blow up”.

The Predator first appeared above Afghanistan nearly a decade ago. Since that time, the Pentagon’s supply of drones has gone from 50 to 7,000. However, 7,000 is hardly enough to start a full-scale robot war. Maybe in a few years, we’ll start seeing more combat troops being replaced with robotic, armed soldiers.

I, for one, welcome our new drone overlords.