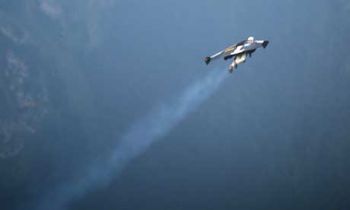 Swiss “Fusion Man” Yves Rossy who debuted his jet powered wing suit back in May wants to fly across the English channel from Callais to Dover. Rossy is confident that his wing can make the journey. Last week he took a 22 mile test flight in Switzerland. His planned channel route should be approximately 29-30 miles.

Rossy launches his jet pack from a plane. He lands his rocket wing by turning off the engines and parachuting to the ground. Rossy’s jet pack reaches insane speeds 186 m.p.h. at altitudes of about 8,200 feet. His mission will supposedly be streamed live on the National Geographic Channel. We’ll keep you posted when we find a date and time for the broadcast.