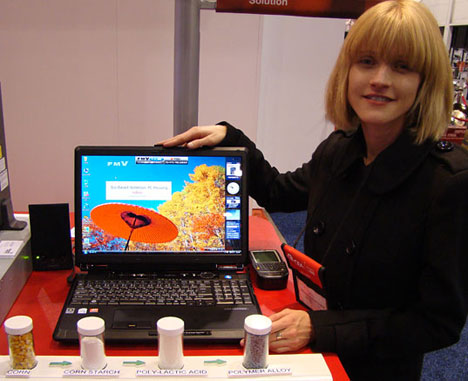 Nom Nom Nom. Now that is what I call a tasty notebook. Don’t get us wrong. We understand laptops have quite a long way to go before they are considered a green consumer electronic, but Fujitsu is on the right track with this laptop made from a corn polymer.

Similar to the material which makes up biodegradable plastic beverage cups, the polylactic acid which is the main ingredient for the casing is made from fermented biomass. So in other words, the corn niblets left over from dinner. Which only bares the question, is this laptop case edible? Not saying I would eat it, but ya know, just in case. Speaking of which, this image is vastly lacking a hottie Asian model, which I would also…. not eat, just in case. — Andrew Dobrow