Folks, We Have A Winner 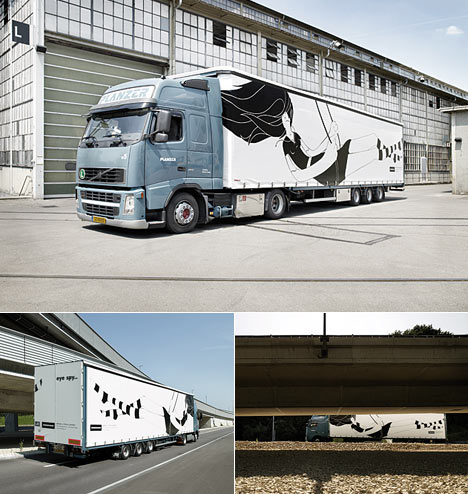 The above picture shows Chris Gray’s winning truck tarp design that was selected for FREITAG’s Design-A-Truck Contest. Here’s one 18-wheeler that won’t settle for any gas station that isn’t the least bit artsy. Having trouble making out the design? Allow me: it’s a disproportional girl on a swing in sexy striped stockings. I think it won because of the stockings. The runners up were even more unsavory, one being a matrix rip off and the other being a paper-cut out collage you could’ve made in MS Paint. Once the winner’s design roams the countryside for the next 5 years on this truck as it secures its status in pop culture, the art will be made into a special limited edition collection of FREITAG bags.

It’s all about design. Now, as for some of the other works shown in the top 30, there were a few that stuck out that would’ve suited the look of a truck better but were not so much the look FREITAG was going for. Hit the jump to check out some of the shown 30 that attracted us:

If you just so happen to snap a photograph of the winning truck out on the run, you can win a free FREITAG bag.
Link (via)