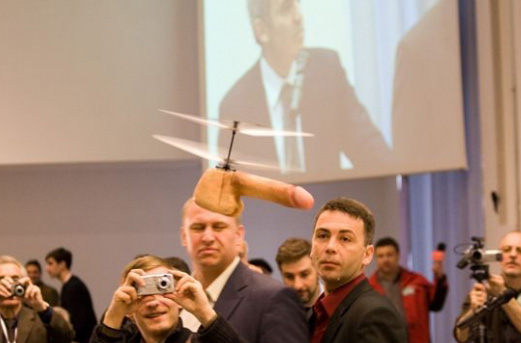 Perhaps the greatest use of a remote controlled device in history: a flying penis flew into the middle of a speech from former chess master and Russian political activist, Garry Kasparov. It seems someone took the time to turn an RC helicopter into a flying cock.

After the security guard swatted it to the ground, Kasparov says, “I think we have to be thankful for the opposition’s demonstration of the level of discourse we need to anticipate. Also, apparently most of their arguments are located beneath the belt.” Someone in the audience shouts, “Finally the political power shows its face!” Kasparov quickly replies, “Well, if that’s its face…” to laughter from the audience.

A large flying penis that took nearly 20 seconds before someone decided to swat it out of the air. I’m pretty sure the last thing you’re going to want to do after seeing a flying penis is touch it. Hit the jump for video of the junk in action.