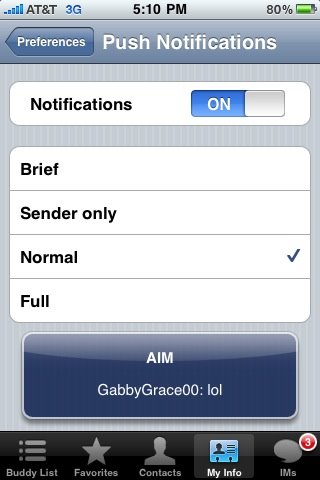 Back when the iPhone 3.0 OS was first announced, one of the biggest features was that applications would feature push notification. Since the iPhone lacks multitasking, this would allow a program to act like your email and push updates/IMs/messages to your phone without it actually being active. Last night, AOL released the OS 3.0 version of AIM and we’re all very excited here at Gearfuse. Push IM is something I’ve longed for, especially since I’m always communicating via AIM. Both the free and paid versions have it and so far, it works pretty well. In the coming weeks, I’d expect to see a lot more push apps available.