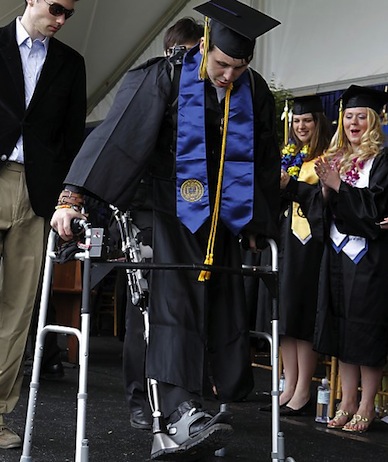 Austin Whitney is paralyzed from the waist down. He graduated this spring from UC Berkley. Also, he did something doctors told him he’d never be able to do.

With help from an exoskeleton designed by a team of doctoral students at UC Berkly, Whitney was able to walk across the stage and accept his diploma.

The team, led by professor Homayoon Kazerooni, has been developing a “computerized body brace,” more commonly referred to as an exoskeleton. Whitney is the beneficiary of a development program that is nearly 10 years old now. What started out as a Defense Department project to find a way for soldiers to haul heavy loads longer distances, has turned into Berkley Bionics. The company, founded by Kazerooni, aims to release the no frills walking machine Whitney used to walk across stage for around $15,000.

The implications are amazing. Allowing paralyzed individuals, with no hope of rehabilitation to walk is a feat. As is producing a machine that typically costs upwards of $90,000 for a fraction of the price.