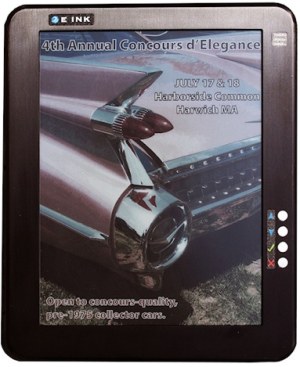 E Ink, the company whose displays power the Kindle and the Nook, is bringing the first low-power, ambient-light color display to market. The Triton display uses the same black-and-white microcapsules as E Ink’s other displays, but adds a color filter overlay to leverage RGB “sub-pixels” out of the monochrome array. Like its black-and-white reflective-displays forerunners, Triton promises weeks, not hours, of battery power. But it’s apparent that the resolution of the new display lacks the richness and resolution of its backlit LED competitors.

That’s not necessarily a bad thing. Mid twentieth-century designers made the most of the flat hues of lithography in their time to create bold graphic art. Think of classic Dr. Seuss, or the work of Andy Warhol, who before he became a pop-art sensation was the 1950s’ most sought-after commercial artist. But I have to wonder whether consumers weaned on iPads and capacitive-touch screens will give Triton’s soft, fuzzy colors—which LED displays can emulate, after all—a fighting chance.