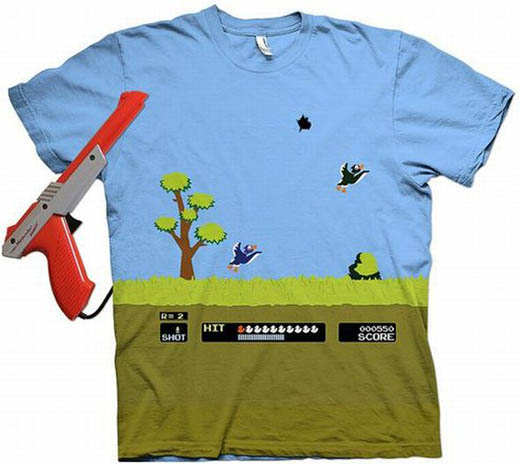 I was playing Duck Hunt the other day for the first time in around 15 years and it made me realize just how great of game it really was/is. I don’t know if it was just because it played such a big role in my childhood, but the game is just painfully addicting, even without the awesome gun controller (I was playing an online emulation).

This Duck Hunt t-shirt, which was up for vote on Threadless (but voting has since ended. Not sure what the result was), perfectly captures the actual gameplay with an awesome full-shirt style design, complete with a faux bullet hole. I don’t think it has been printed yet, but if or when it is, I’m all over it. If anything, it would be a great way to rock my Duck Hunt pride in the summer. Because lord knows in the winter it’s all about the Duck Hunt sweater.