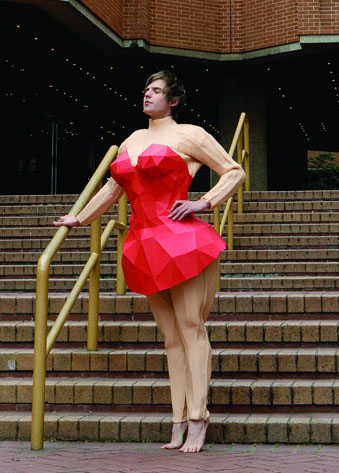 For those not familiar with Marc Owens’ work, he’s the man behind the Avatar Machine. It’s a suit which allows the user to view themselves as a virtual character in real space via a head mounted interface. Now he’s working on another suit that’s sure to turn heads. According to a study that found that 54 percent of all males and 68 percent of all females gender swap in a virtual setting, psychologists have proven that the majority of people aren’t satisfied with their gender and want to cut their genitals out.

Thankfully, Marc Owens has the cure. If you’re the kind of guy that feels comfortable dressing up in your mother’s clothes or the kind of girl whose always wanted to play QB on the high school football team then the Virtual Transgender Suit was made for you. It replicates the aesthetics of the typical virtual female form while portraying it in physical form, kind of like if you were to act out Facebook in a real life setting. So, if cross dressing just seems a little too gay for you, how about trying out the Virtual Transgender Suit? You’ll look like a woman but no one will criticize you because you’ll look like a virtual woman.