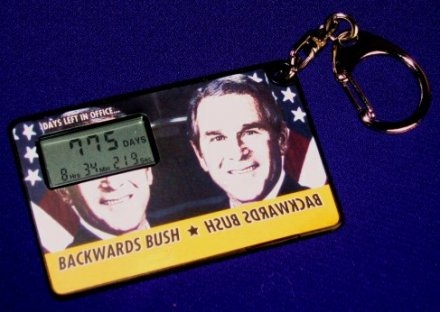 Here’s a gadget for anyone counting down the seconds until Bush is out of office, which is about 70% of you if recent approval rating polls are accurate. With the upcoming 2008 election looming ahead and campaigns already in full force, there’s nothing like a nice reminder to keep you chugging through the current administration.

Bush has something like 600 and something days left in office. We don’t know the exact time left until the January 20th, 2009 inauguration. The reason we don’t know is because we don’t have this cool Countdown for Bush keychain to keep us posted of every passing second. Available now for $9.99. — Andrew Dobrow