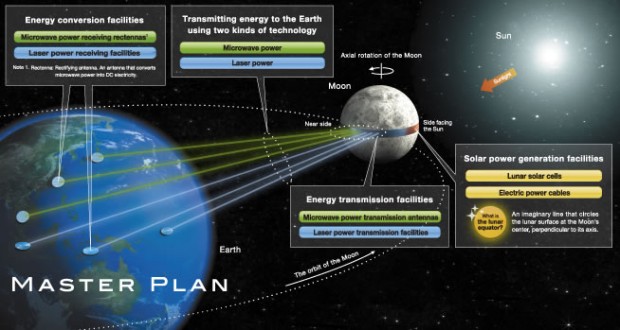 The Tokyo-based Shimizu Corporation is one of the world’s leading construction and engineering contractors. It’s also a prolific producer of corporate science fiction: fanciful, high-concept design projects that offer glimpses of astonishing futures. Shimizu’s envisioned projects include standard-issue floating cities and networks of lakes and canals stretching across Earth’s deserts. Browsing the Shimizu Dream, the prospectus for the “Luna Ring” caught my eye. It’s a vision of a bright future for the moon—and for Shimizu.

Shimizu’s Luna Ring prospectus describes a belt of solar panels arrayed along the lunar equator, stretching to encircle both the visible and far sides of the moon. Power generated by the panels will be transmitted by wire to large transmission dishes on the visible side which will beam the power to Earth. 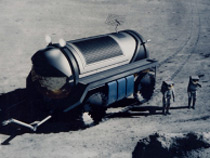 Shimizu would produce the solar panels and much of the resulting infrastructure from raw materials available on the moon. “Lunar resources will be used to the fullest extent possible in constructing the Solar Belt,” Shimizu’s prospectus avers. “Water can be produced by reducing lunar soil with hydrogen that is imported from the Earth. Cementing material can also be extracted from lunar resources. These materials will be mixed with lunar soil and gravel to make concrete. Bricks, glass fibers and other structural materials can also be produced by solar-heat treatments.” An army of robots would be tasked with mining, manufacturing, and construction, overseen by a small team of human astronauts (which would be a perfect job for clones). They would travel a Great Lunar Highway running along the center of the ring—an endless ring-road nearly 11,000 kilometers in extent—built over transmission cables.

Shimizu’s plan is silent on the astronomical costs and extraordinary engineering challenges of such a project; that, of course, is simply good science-fiction style. The Luna Belt’s possible effects on Earth—including alteration of the migratory behavior of birds and insects and disruption of circadian rhythms of myriad species of animals and plants—similarly goes unconsidered. But a river of solar cells girdling the moon certainly would be a sublime sight.

Although such disturbing effects remain vague, the prospect of an endless, globally-available supply of clean energy flowing from the Luna Ring is profoundly attractive. Of course forty years ago Stanley Kubrick and Arthur C. Clarke believed that the moon would be bustling by now. So Shimizu had better get cracking.