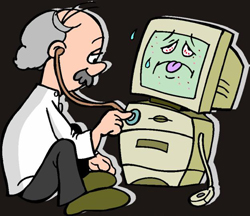 Even though computers were still, by and large, the size of an entire room in 1971, they were still susceptible to computer viruses. In fact, they were even more vulnerable than PCs today because, frankly, no computer had every experienced a virus before 1971. That was, of course, until the “Catch Me If You Can” creeper virus first appeared.

Released in a lab environment in 1971, the “catch me if you can” virus was, to be blunt, a concept. Computers had only begun to become connected to any form of network (think really, really early version of the Internet), and the creeper’s sole purpose was to jump from machine to machine and challenge the computer user by displaying the phrase “I’m the creeper, catch me if you can!” on their computer screen.

While the first computer virus appeared in 1971, the first virus to harm computer systems wasn’t until 1987, when the Jerusalem virus was released on an unsuspecting world. Still, it wasn’t until the switch to the 2000s that computer viruses became a real and common threat to computers. Luckily, there are now a cavalcade of programs to help fend these kinds of viruses off.