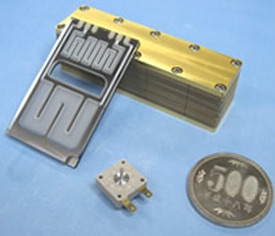 Fuel cells seem to be the rage these days, what with LG showing off a concept laptop powered by one, and now Casio has developed this tiny wonder. Measuring just 27.2 x 46 x 2.8mm, Casio’s new fuel cell converts methanol to hydrogen gas. DigitalCameraInfo claims the device can remain ‘autonomous and continuous’, though it’s unlikely they mean that literally, which would make this a perpetual motion machine. In any case, this tiny chemical engine could be driving a camera or laptop near you soon, as Casio plans to release it early next year. — Mike Payne