A question that will leave most tech-heads shaking their heads in unison – can website hosting be made idiot proof? Well Brace is trying. 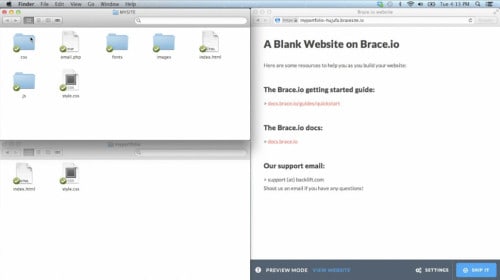 Brace is a new service that utilizes Dropbox to organize and sync files to personal websites. Theoretically this means that people who don’t understand the “complexities” of FTP and the like, can now utilize a drag and drop system to manage their files and styles.

Most notably Brace creates two separate versions of your website so that you can see changes as you make them; however, they are not published until you make them live. This makes things much easier for the less experienced who need a visual while making changes and it decreases the chances that something will get overridden by accident.

Consumers will begin to get access to Brace in October and more details on the project are sure to be released between now and then.