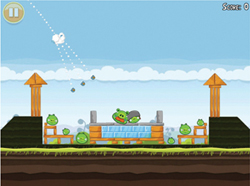 This week is GDC, or the Game Developers Conference. For those of you who have never heard of it, GDC is essentially a giant event in San Francisco reserved for games industry professionals to get together, catch up with old friends, network with new friends and generally try to learn and expand their own views of game design and development.

One of the staples of this event is the almost endless number of panels that are held that talk about everything from the way games are portrayed in the media to how independently developed games and mobile gaming is the future for the industry. One of these such panels had Rovio’s Peter Vesterbacka taking questions from the crowd. At some point during the Q&A session, a man by the name of Erin Catto asked Mr. Vesterbacka a single question: “Could you tell me which physics engine Angry Birds uses?

Catto: Hi, Peter. Could you tell me which physics engine Angry Birds uses?
Vesterbacka: Box2D.
Catto: Great. Would you consider giving credit to Box2D in your game?
Vesterbacka: Yes, of course.
Catto: Thank you! By the way, I am Erin Catto — the creator of Box2D.
Vesterbacka: Great! I would like to talk to you after the session.

According to Catto this was not done in some kind of spiteful attempt to catch Mr. Vesterbacka off guard. In fact, Catto says it was done in a friendly manner, and that he only went about things in this manner because he doesn’t ask for a credit for his license as it would scare off some developers.

Personally, I’m a little surprised that Rovio hasn’t credited Box2D already, but I don’t think it was done out of spite. From what I’ve read and seen, Rovio seems like a stand-up company so hopefully I’ll be downloading an app update in the near future with the credit for Box2D included.