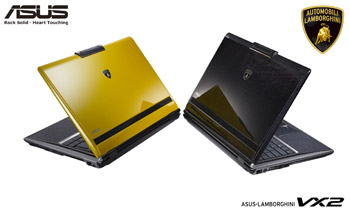 Maybe you caught them during the keynote, maybe you never watched it to begin with. Either way, these new laptops will make heads turn for sure. They were shown during Bill Gate’s opening keynote speech for CES 2007, but just for a quick second while scrolling through the rest of Vista compatible laptops that will be released alongside with the new OS. These brand spankin new Asus Lamborghini laptops look just about as nice as the Asus Ferrari laptops (which have been out for some time now). So really, what do these uber-high-end laptops offer to us?

That’s all nice said and done, but there aren’t any real specs as of right now. Of course, these won’t be in your $1500 budget, but they won’t have just $1500 components either. Because they are being pushed with Vista, we can expect to see only the best hardware being shipped inside of these. But do the specs really matter to the people who will be able to afford these? Probably not. Those who buy into products like this usually are so loaded that all they care about is that they now have a Lamborghini to challenge their best friend’s Ferrari laptop. Anyways, they look nice, right? — Nik Gomez