Are you a Guitar Hero? Xbox 360 game info here. 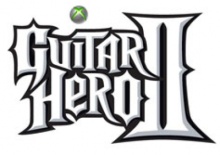 Those guys over at Team Xbox have gotten quite lucky and snagged some official images of the box and guitar bundle for the Xbox 360 version of Guitar Hero II. Guitar Hero II was (and still is with the recent release of version II) a phenomenon like DDR for the PlayStation 2 when it came out. It seems that these live type of games really do have a place in casual and hardcore gamers homes. Back to these images. On the box there is some text about somethine called “downloadable content”… SWEET! While the DDR games for Xbox had downloadable content, Guitar Hero is a game far more fitting for fresh content because it does not rely very heavily on original material, most everything is popular songs. Another little note is that there was not a large “playable over Xbox Live” sign on the box. While this doesn’t rule out the possibility, it does dampen the chances that you might be able to shred with your online friend who lives halfway around the world. With the inclusion of great multiplayer modes in the PS2 version of Guitar Hero II, being able to play on Xbox Live would be an amazing selling point, but right now it looks like it isn’t going to happen. — Nik Gomez