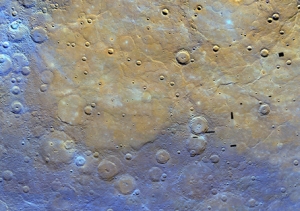 The first sci-fi novel written about humans colonizing the planet Mercury was written in 1922. Since then, many people have speculated about the possibility of setting up habitable space stations on the planet’s surface. This is despite the fact that the temperature on Mercury fluctuates 1,100 degrees Fahrenheit on a daily basis, with daytime temperatures hot enough to melt a soda can.

NASA’s MESSENGER spacecraft has been observing Mercury for about 3 months. Recently, it was announced that the recovered data confirmed that Mercury’s craters have the potential to contain frozen water. Since daytime temperatures on Mercury reach up to 800°F, it was previously assumed that Mercury didn’t even have the potential to hold water. Though this doesn’t mean we’ll be setting up camp on Mercury anytime soon, it’s still proof that we really don’t know everything about our own solar system.