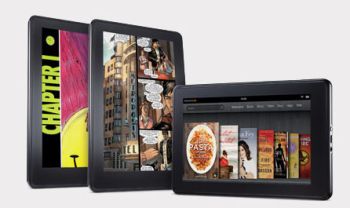 Last week, Barnes & Noble unveiled their latest “Nook” tablet, which will directly compete with Amazon’s Kindle Fire tablet. However, the newest Nook will be priced higher than the Kindle Fire, which has many analysts wondering which tablet will dominate the market this holiday season.

It was confirmed that the new Nook will support Hulu Plus. Now, it seems that Amazon has also added support for Hulu Plus on the Kindle Fire tablet, which will be shipping out next week.

Hulu Plus does require a subscription fee, which will cost $7.99 per month. Amazon has also revealed that ESPN Scorecenter will be supported by the Kindle Fire tablet. If you purchase a Kindle Fire, you will also get a one-month free trial of Amazon’s own streaming video service.