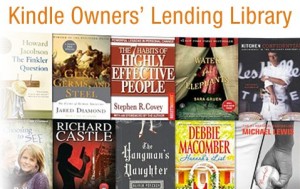 Well, it looks like book lending might actually go mainstream in digital markets (finally). Amazon has introduced the Kindle Owners Lending Library, giving Kindle owners the ability to “borrow” books for free that can be digitally downloaded onto any Kindle device.

Now, digital book lending isn’t exactly new, but this is the first time it’s gone public in such a large existing network (Kindle owners). It’ll be interesting to see if Amazon is able to sustain the system, especially after the Kindle Fire goes mainstream.

However, there is a bit of a catch. In order to have access to the Kindle Lending Library, you have to own an Amazon device, such as the Kindle (or the upcoming Kindle Fire Tablet). Also, you will need to be an Amazon Prime member, which means you’ll have to pay a fee of $79 per year. However, there are other benefits of Prime membership, which can be found on Amazon’s website.