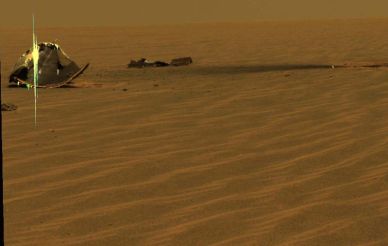 NASA’s Opportunity Mars Rover has been releasing some really gorgeous photos of the alien Martian landscape. This week, NASA has actually released an older, true color-rendered photo showing the remains of the Opportunity’s destroyed heat shield, which was severely damaged when entering the Martian atmosphere.

To the left of the photo, you can see the famous “Heat Shield Rock”, which is a space meteorite discovered by the rover in 2005.

The heat shield was effective at protecting the Opportunity Rover when it landed on Mars in 2004 — three weeks after its twin, the Spirit Rover, landed on the other side of the red planet. Communication with the Spirit Rover was lost in March of 2010.

The Opportunity Rover has continued to function for 30 times longer than NASA had predicted, still transmitting statistical data and photos to Earth.