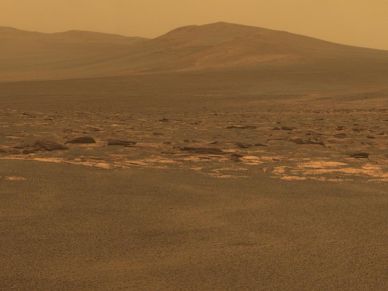 With all of the chaos happening down here on earth, it’s easy to forget that NASA’s Mars Exploration Rover Opportunity is up exploring the Martian landscape. A new photo released by NASA shows some truly eerie imagery of the Endeavour crater, which is approximately 14 miles wide.

The bleakness of the landscape is an interesting reminder that we really aren’t that familiar with the landscape of foreign planets.

Check the source link for a higher resolution version of this photo, as well as a detailed explanation of the next move for the Opportunity Mars Rover.