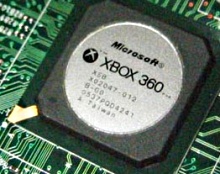 If you were waiting for the Xbox 360 to drop in price, don’t hold your breath. One way that manufacturers are able to make their consoles less expensive is by reducing the size of the CPU die. Why does this allow for them to lower prices? Because they are able to fit more processors on a manufacturing run. Another small benefit of smaller dies is that they are able to run at cooler temperatures than larger dies. Microsoft had announced that they would be able to start producing 65nm processors in Q1 of 2007, but they have just pushed the launch time to mid-2007. Quite a push seeing as Christmas has just passed and their peak sales might be slipping away as more Wiis and PS3s are being shipped everyday from Japan. The Xbox 360 needs the price drop now to maintain its lead in the market, and because this price drop isn’t coming, Microsoft needs to do something drastic to make up. — Nik Gomez