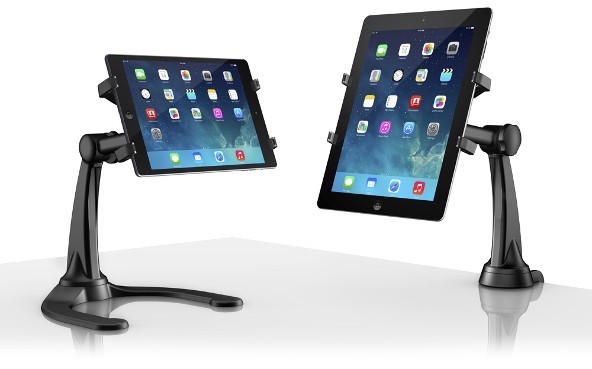 While IK Multimedia is popular for its wide range of studio and recording accessories for iOS devices, the company has launched a new line of products- a series of stands and cases. Even though these products have also been aimed at audio recording theaters and studio settings- usually providing mounting options for iPads and IPhones on music stands and mics. With iKlip Grip, the innovative company has deviated from that more specific use, producing a more general selfie stick mount for iPod and iPhone users.

iKlip Grip features a modular design made of three components- a multifunctional tripod, a detachable telescoping tube, and an expandable bracket to hold your device that is also tripod mountable. The bracket and tripod are made from typical light but hard-wearing thermoplastic material while the telescoping tube is constructed from aluminum.

It can be put together either with or without the detachable telescoping tube, however switching back and forth between the configurations will certainly involve some serious disassembly and assembly. The contraption is at its versatile best when kept in the configuration, even though since it isn’t fully collapsible it adds an extra inches of height to the iPod or iPhone over using just the tripod. With the telescoping tube in place, the tripod extends up to round about 20” in total, either for handheld use or from a standing base. It’s worth noting that the tripod also functions as a handle when folded in, with rubberized shades and a shape that make it suitable for this application.

The spring loaded mounting bracket- that has enough tension to securely hold your device – and ball joints –that allows the iPod to be oriented in either a landscape or portrait orientation- are clearly one of the remarkable features that set this apart from other tripods in its class. It also has a bluetooth shutter button that you can use if you are away from the stand and are using it as a tripod.

Overall, it is a thoughtfully engineered and purposefully designed product with some good features and nice touches. However, it carries a slightly premium price tag. Yes, you’re certainly getting a versatile design and solid build quality, but it comes down to how much you want a selfie stick with your smart phone. Go for it, if you are serious about capturing photos on your iPhone and find yourself wanting a multi-purpose accessory that you can show off.

Next we take a look at iKlip Xpand Stand review from IK Multimedia.

What distinguishes this iPad Stand from its predecessor is that the very part that securely holds the iPad is actually expandable. Pull the brackets apart to expand the mount, and set the tablet between them, and there you go. The solid spring loaded mount will take control, snapping into place and holding your tablet with a secure grip. Speaking of its expandability, it fits small devices that are anywhere between six to 8.7 inches in width. It means that you only need this stand for your iPad, iPad mini, iPad Air, or any other tablet that has similar dimensions. If you keep upgrading your iPad every year, this is the perfect mount for you because you will never have to worry whether it will fit the new buy our not.

Out of the box, the Xpand stand needs to be assembled, however only in one place. The ball joint has to be attached to the mount with the screw, which also functions as the tightening knob for the mount. Then, all you need to do is attach this to a mic stand, clip on your tablet, and you are all set to go.

The ball joint in this stand can be tightened or loosened so you can set it whichever angle you want. If you use a boom stand or a straight stand, you will also be able to mount your tablet for optimum viewing. The mount that attaches to the mic stand is compatible with any pole that isn’t bigger than one-inch around so you no longer need a mic stand.

While connecting the tablet to the mount is a cinch, removing it is not as easy as you think. It does take a bit of a muscle. If the brackets were a little looser, the tablet wouldn’t be sitting down securely so the trade-off is not a big deal.

It has got a good build, and a lovely design. It mounts close to your position so you’ll see what you need without having to look too far. All in all, it’s a must have stand for any musician who relies on their iPad while playing before a live audience or rehearsing.