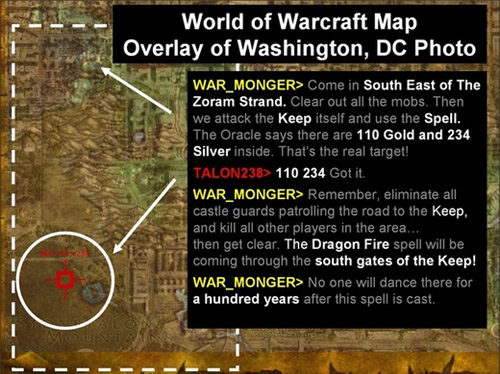 Boing Boing Gadgets has an interesting write-up on how Blizzard’s World of Warcraft is being used as a tool for practicing terrorism on our home turf. In this case, a particular raid is modified to reflect an attack on the White House.

[T]wo World of Warcraft players discuss a raid on the “White Keep” inside the “Stonetalon Mountains.” The major objective is to set off a “Dragon Fire spell” inside, and make off with “110 Gold and 234 Silver” in treasure. “No one will dance there for a hundred years after this spell is cast,” one player, “war_monger,” crows.
Except, in this case, the White Keep is at 1600 Pennsylvania Avenue. “Dragon Fire” is an unconventional weapon. And “110 Gold and 234 Silver” tells the plotters how to align the game’s map with one of Washington, D.C.

Seems kind of silly until you realize that it’s probably true and actually could be used to help promote terrorism. Hit the link for the full skinny on the terror plot the Pentagon uncovered.