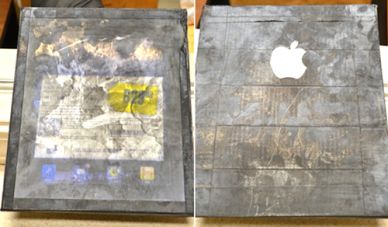 Sure, we’ve seen our share of cheap knock-off gadgets impersonating major brands. However, some scammers in South Carolina have actually managed to successfully sell an iPad made of wood to an unsuspecting woman.

Ashley McDowell, a 22 year old woman, was hanging out in a McDonalds parking lot in South Carolina. Suddenly, she was approached by two men. They claimed that they’d bought iPads in bulk, and were willing to sell her one for $300. When Ashley told them that she only had $180, they agreed to sell her one for that price. They handed her a sealed FedEx box which supposedly contained the iPad.

However, did Ashley open the box to see proof of her item before paying? Nope. She drove all the way home before she opened the box, and discovered a dirty piece of wood inside. The scammers had even gone so far as to tape a “screen” replica (made of paper) onto the wood, and put an Apple logo on the back.

We’d usually include some advice here about buying from “men in parking lots”, but… seriously, this should just be common sense.