Unevenly Distributed: Minecraft (or “I Have No Mouth and I Must Build”) 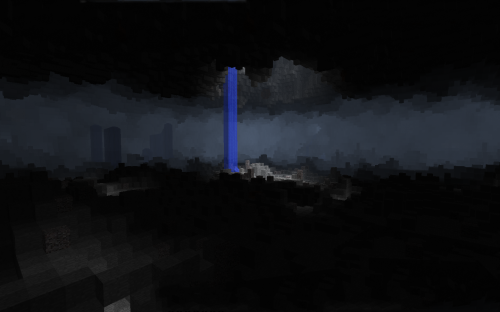 In Minecraft, I am immortal, the last man on Earth.

Over ‘Earth,’ imagine a superscript. Think of it as a three-dimensional period, counter-gravitationally defiant, hovering in space as if kept aloft by the very memory of its support. This is very much in keeping with the world in which I, an immortal, find myself… but it’s also the crux of why Minecraft isn’t just PC gamings’ trendiest new box of 8-bit building blocks. It’s also a solipsist’s god sim… with all of the loneliness and pathos that implies.

In Minecraft, the world is made up of blocks, each a three-dimensional pixel or a voxel. This world has mountains and trees and seas and animals and rivers of lava, but all of these exist in a universe in which Euclidean geometry past the cube is as arcane and impenetrable as it would be in Flatland. Trees are simply blocks of wood and blocks of leaves stacked on top of each other; pigs are just quivering cubes of bacon, stacked in pig-like configutation. When I chop down a tree, or hew coal out of a mountain, or scoop water out of a lake, the chunk or bucket comes out in my hands in a perfect, self-sustained cube. 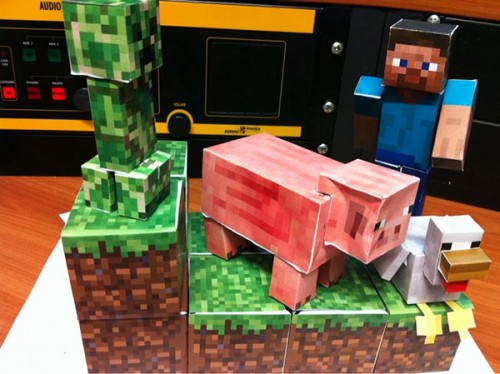 If I were of Minecraft’s world (which I am not) a pyramid would be as nightmarishly unfathomable as some Eldritch thing, poking its beak through the abyss. Since I’m not, he physics here seem promising, almost over generous.

In Minecraft, you can build castles in the clouds, not because the turrets are held aloft by some sort of counter-gravitation engine, but because you built your sky castle on a support high enough to reach the cubist ether… and then dismantled the support, leaving your castle hover in mid-air, as if supported in space by the mere memory of solid land beneath it. (In this way, the world of Minecraft borrows some of its Newtonian rationale from Road Runner cartoons.)

These are the essential elements of Minecraft: a world made up of infinitely rearrangeable cubes and a working model of gravity that embraces levitation, and therefore removes the onus of practical physics from architecture.

Added to these two integral gameplay elements are a host of supplementary systems including a robust crafting mechanic, monsters that rampage through the world at night (or within the Earth’s darkest hollows), a random world generator, support for farming and keeping livestock, a fast-travel dimension haunted by murderous ghostly swine, and many, many more things besides… all of which have helped to make Minecraft one of the most astonishing financial and creative successes that indie PC gaming has seen in the last few years.

In Minecraft, you can build yourself a life-size replica of the USS Enterprise, so vast and massive a space ship that you can’t even see the warp nacelles from the saucer. You can recreate levels from your favorite video games. You can build a working 16-bit computer with the devious analog complexity of a labyrinth. All you need is the time to bring your architectural fantasies to life, voxel by voxel.

Luckily, you’ve got plenty of time, because you, the player, are immortal. Death — whether from digging a block of copper out from under you and subsequently falling to your death in a mile-deep underground chasm, or simply by being attacked by one of the bouncing Creeper blobs that hop around the overworld — is a very transient thing: when you die,your equipment and building blocks are spewed in every direction and you immediately respawn at a set point in the world… the omphalos from which the rest of Minecraft‘s infinite, procedurally generated world spreads. Depending on how far you’d wandered since you last died, your respawn point might only be a few feet away from where you died… or several continents away. 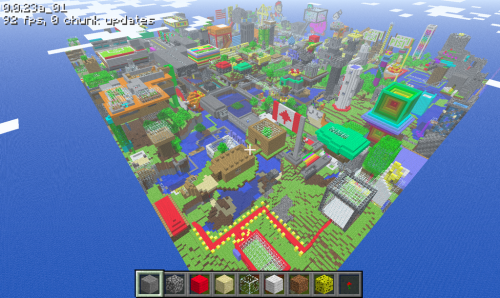 A lot of attention is paid to Minecraft as an incredible sandbox game, but there’s more to Minecraft than just a 3D set of building blocks to play with. Minecraft‘s setting itself is haunting, in that it forces players into a situation where the entire game is to answer this question:

Obviously, for makers and DIYer types, the world of Minecraft is a fantasy land of possibilities. But for someone like me — who doesn’t even understand the base physical principle that allows a hammer to drive in a nail — Minecraft is instead steeped into a broad genre of fiction about both loneliness, immortality and the ironic futility of great works.

When I play Minecraft, I am reminded vaguely, on the video game side, of Planescape: Torment, Black Isle’s breathtaking 1999 CRPG that explores the changes a man makes in both the world and in his own soul — gradually, millennia after millennia — when he can never die. But as I explore a huge underground cavern swarming with the undead, I am also reminded of the protagonist of Harlan Ellison’s classic post-apocalyptic science fiction story, I Have No Mouth And I Must Scream, in which the five protagonists (the last survivors on Earth and made immortal by a god-like and deathless computer named A.M. expressly for the purpose of torture) set on a year long journey through the center of the Earth, just to see if there might be a can of peaches on the other side. 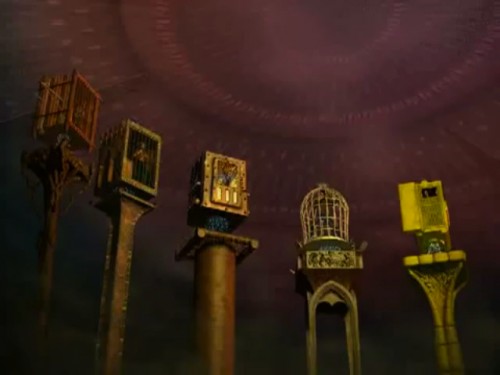 However unintentionally, though, Shelley’s Ozymandias is the work that Minecraft most consistently evokes in me when I play it:

I met a traveller from an antique land
Who said: Two vast and trunkless legs of stone
Stand in the desert. Near them, on the sand,
Half sunk, a shattered visage lies, whose frown
And wrinkled lip, and sneer of cold command
Tell that its sculptor well those passions read
Which yet survive, stamped on these lifeless things,
The hand that mocked them and the heart that fed.
And on the pedestal these words appear:
“My name is Ozymandias, king of kings:
Look on my works, ye Mighty, and despair!”
Nothing beside remains. Round the decay
Of that colossal wreck, boundless and bare
The lone and level sands stretch far away.

Are the massive castles or statues I built in any of my inevitably discarded Minecraft worlds really much different? Colossal works of deific arrogance conducted for the benefit of the author’s own ego, then swiftly forgotten.

Minecraft is a delightful, quirky and entirely unserious game. It’s a jumble of many things: a world-builder, a spelunking simulator, a light-hearted action game, and more besides. If you want to spend your time in Minecraft digging a giant underground chasm for yourself, or building a working roller coaster, or creating an automated bacon vending machine, or even just uninspiredly creating an enormous, island-sized pixel art Mario levitating a thousand feet in the sky, you can do it.

But pluck the world of Minecraft from a video game and bring it into fiction, and all of a sudden, it has a depressive heart, of boredom and loneliness and the utter futility of great works when there’s no one to appreciate them. I’m not sure if that secret depressive heart makes Minecraft a better game or not, but it does, at least, make Minecraft the rare game that you can actually think about.