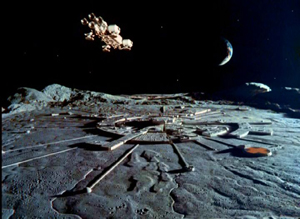 It’s generally believed that if we’re to ever go to Mars, we’ll have to establish a base on Luna (the moon) in order to properly support the efforts. Among the cavalcade of problems is the simple question of “where would we build it?”

ISRO scientists may have just answered that question for us.

In their study of the moon, Indian Space Research Organization researchers using the Chandrayaan-1 discovered a cave near the moon’s equator that’s 120-meters wide and 1.7-kilometers long. Scientists at the Space Applications Center in Ahmedabad say that the cave could provide “a safe environment from hazardous radiations, micro-meteoritic impacts, extreme temperatures and dust storms.”

Of course, the site would have to be explored and examined in much greater detail before we sent up the galactic construction crews. But, assuming that it checks out, these tubes would provide a relatively dust-free environment and require only a minimal amount of construction. It’d be perfect, if we could make it work.