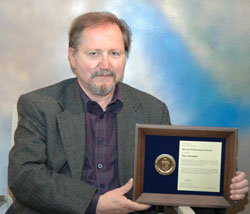 It’s almost become a type of cliché in science fiction: colonizing Mars and other celestial bodies so that the human race can propagate and populate the galaxy. Unfortunately, according to NASA scientists, reproduction while in space will hamper future colonization and population efforts.

According to NASA Ames Chief Life Scientist Tore Straume (seen left with a villainous goatee), the radiation generated by cosmic rays and solar flares will make it difficult to conceive during interplanetary travel. Moreover, any child conceived during spaceflight could become sterilized due to the radiation. This conclusion is based on multiple studies conducted on “non-human primates” (read: “monkeys”) that were given doses of radiation and saw that the eggs of female fetuses began to die off during the second half of pregnancy, resulting in a sterile female when the fetus is finally birthed.

Straume says, “One would have to be very protective of those cells during gestation, during pregnancy, to make sure that the female didn’t become sterile so they could continue the colony.”

Similar problems could be seen in men, with the radiation damaging the male’s sperm. It’s also believed that in addition to the sterilization issues, other mental and physical defects could result from the radiation’s effects on a fetus.

Once the colonists reach Mars, the combination of the planet’s atmosphere and shielding from the structures that will almost certainly be built on the planet’s surface will provide some shielding against the radiation.

Seeing as how it’s calculated that any manned mission to Mars would take roughly 214 days, this could be seen as more of an issue for colonization outside of the Solar System. After all, there are D&D fans (including this writer, sadly) that have gone longer than seven months without making the beast with two backs, so one would think that trained astronauts could easily practice self-restraint while hurtling towards the Red Planet.