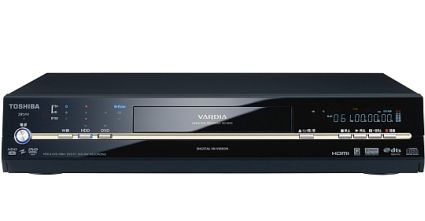 Are you completely sick and tired of hearing about the constant battle between what companies are supporting Blu-ray or HD-DVD? Well, even though toshiba is decidedly HD-DVD, they have just released two DVD or HDD players. In interesting part (and a disadvantage to some) is that they have no support for either Blu-ray or HD-DVD.

The two models are named the RD-S600 and the RS-S300. So what do they offer instead of next-gen DVD tech? They offer huge hard drives. The 600 and the 300 offer 600GB and 300GB drives, respectively. They have DVD burners, an HDMI port, and and upscale your content to 720p/1080i video. No price released yet, but those hard drives won’t be cheap. — Nik Gomez