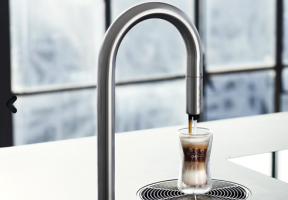 ‘Top Brewer’ is a coffee maker that’s controlled by an iPhone application — what else could today’s caffeine-fueled gadget junkie want?

A company called Scanomat has released information about Top Brewer, a coffee maker that streamlines the process of creating the perfect cup o’ joe.

Aside from being incredibly innovative, the Top Brewer is visually appealing as well. All of the grinding and brewing mechanisms are hidden underneath your kitchen counter, with only a sleek faucet-like spigot protruding above the counter.

Oh, did we mention that the Top Brewer is self-cleaning? Too bad this cool concept will probably be incredibly expensive once official pricing is released.