Three Aluminum LEGO Figurines on a Mission to Jupiter 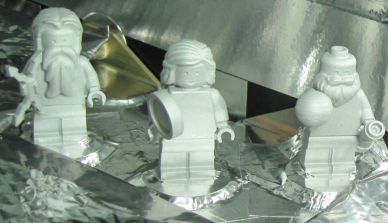 When NASA first began planning its Juno mission to Jupiter, did they know that they’d have three extra passengers on board?

Apparently LEGO has been hard at work creating three LEGO figurines that will be hitching a ride on the Juno mission. The three figurines are the Roman god Jupiter, Roman goddess Juno, and famous historical figure Galileo.

The three figurines are made of aluminum, and apparently cost around $5000 (each) to make. The LEGO crew had to take special care that the figurines wouldn’t interfere with any of the calculations made by NASA for the spaceflight.