This Quick Bike Snow Tire Fix is a Splendid Hack 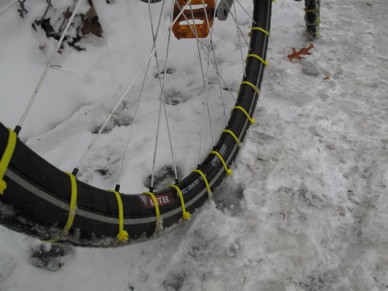 Fritz Rice of Seattle’s Dutch Bike Co. in Seattle outlines a very neat trick for hacking a snow bike: ditch the tedious, expensive, and dangerous studded tires for a packet of zip ties. Whipped around the wheel, Rice claims they provide him all the traction of studded tires without the expense and the trouble. I rely on my bicycle a lot, so I’m determined to give this a try. (I’ll also be wasting time visiting the Dutch Bike Co. web site to stare dreamily at the Linus Roadster.)

Rice grumpily allows that the idea isn’t his own:

It pains me to admit this not because my ego suffers, but because the zip-tie-DIY-bicycle-snow-chains idea appears to have originated with my favorite bicycle industry whipping boy: fixed gear hipster culture. Several years ago, I’m sure, some bright child with extremely tight pants and an asymmetrical haircut had a genius-caliber idea, and I hate that it wasn’t me. So here it is: Fixed gear street bike hipster guys, I’m sorry for the things I’ve said over the years. It’s not true that the only drink you like is 4Loko. It’s also not true that you’re not allowed to wear shoes that don’t match your bikes. You can wear whatever you want. And finally, you have come up with a good idea besides brightly colored deep-section rims.

As a grudging fan of fixie hipster culture, Mr. Rice, I salute your equanimity. [Dutch Bike Co. via Like-Cool]