The uncanny biosphere of Google Earth

Google’s addition of 3-dimensionally rendered trees to Google Earth 6 is receiving a surprising amount of attention today. It’s clear that our virtual engagement with the real is getting more uncanny all the time.

Let’s start by acknowledging that this isn’t a forest: 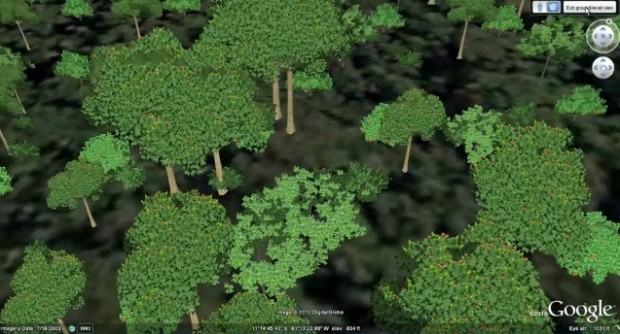 Google has modeled some fifty species of trees, introducing some eighty million copies of them throughout Google Earth 6. But even if gathered in one place, those tree clones don’t make a forest. Trees have roots; they have tissues; they’re colonized by birds and insects and fungi and on and on, a cascade of Darwinian struggle and concord. Where does a tree begin. and where does it end?

On the other hand, we would all agree that the scene in image below is a forest, even though the groves of aspen in them are comprised not of individual trees, but cloned “stems” of a single giant superorganism:

I love the surreality of Google Earth: it’s always bending towards the real but swerving at the last moment. It ends up with bizarre and incomprehensible landscapes and scenes—like the image of my own street rendered in Google Earth 5, below: my neighbors’ house and automobiles flattened and ploughed in, constellated with an array of amazing bubbles into which one can “fly” to access StreetView imagery: 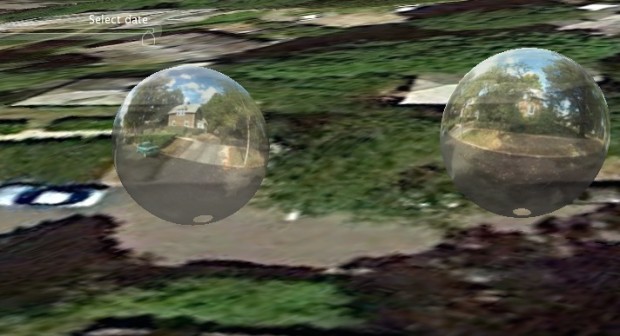 So marvelous and strange, this Google Earth! So estranged from the world we live in—and yet in its cascade of Darwinian struggle and concord, with images and technlologies fighting for mindshare and survival, not unlike it altogether.

Elsewhere, I’ve called Google Earth an uncanny palimpsest: a collage not only of places but of times. It’s not an image of the world as it exists—a real-time polaroid snapshot of all that is the case. But then, neither is the real Earth, is it?