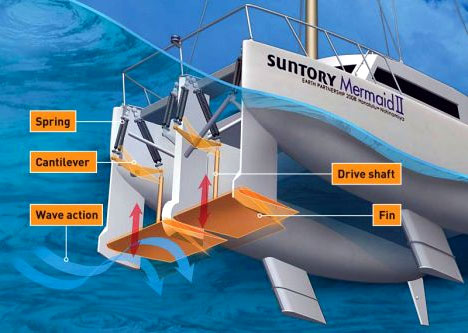 You can’t say the Earth doesn’t contain enough water. Nope there is more than enough of that for sure. So why are we not using it more? Especially for sea-going vessels. The Suntory Mermaid II is a boat that uses something waves to provide it the energy it needs to move.

Being touted as the greenest nautical power source since the sail, the Mermaid II uses two fins side-by-side along the bow which are moved by the waves to produce a dolphin-like kicking propulsion movement. The only drawback is that the Suntory will move at around five knots, which is 2-3 times slower than your average diesel ship. — Andrew Dobrow