The descent of poo 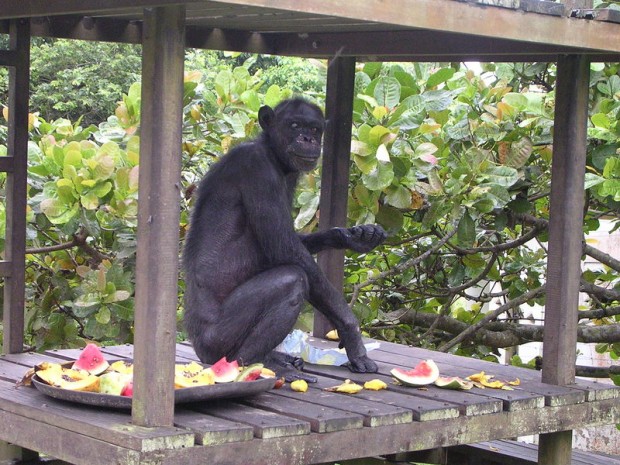 Each of the five great ape species (including Homo sapiens) carries in its gut a species-specific community of microbial companions, according to an article published in the Public Library of Science: Biology. Each gastrointestinal fauna is so specific that the identity of the species from which any given sample comes could be made on the basis of the bacteria alone. What’s more, researchers found that the evolutionary relationships of the different microbial communities follow the same pattern as the diversity of the ape species’ genomes. From the abstract:

(T)he branching order of host-species phylogenies based on the composition of these microbial communities is completely congruent with the known relationships of the hosts. Although the gut is initially and continuously seeded by bacteria that are acquired from external sources, we establish that over evolutionary timescales, the composition of the gut microbiota among great ape species is phylogenetically conserved and has diverged in a manner consistent with vertical inheritance.

—meaning that these gut microbes have stayed with their species over evolutionary timescales, despite changes in geography, environmental factors, and diet.

As the study notes, we’re born with sterile guts that are soon colonized by bacteria we pick up from our mother. Some of those bacteria stay with us throughout our lives; others we pick up from our environment and the foods we eat as we mature. Such bacterial fauna play an important role in maintaining healthy digestion and protecting the gut from infection. So there are good evolutionary reasons why each species’ gastrointestinal environment preserves its preference for a particular, evolutionarily-endowed set of microbial partners, even as the inputs change over time. As the study puts it, “It seems after all that you are not what you eat.” On the other hand, the result gives new meaning to the idea of the gut-check.