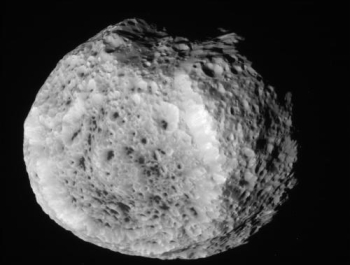 NASA’s Cassini spacecraft has been sending back some amazing data, which just recently included an incredible visual of one of Saturn’s moons.

Hyperion is one of Saturn’s oddest-shaped moons, and is just 168 miles across. Due to its irregular shape, its orbit around Saturn is chaotic, making it extremely difficult for scientists to predict.

This latest trip around Hyperion by the Cassini spacecraft is the second-closest its ever been to Hyperion, besides a flyby in 2005 that took the spacecraft 310 miles above Hyperion’s surface. The new photos are important, since they’ll assist scientists in creating more detailed maps of Hyperion’s surface.