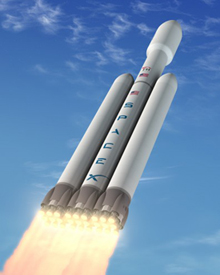 SpaceX, a private company founder by PayPal co-founder Elon Musk, has vowed to build the largest rocket since the end of NASA’s Apollo program. According to Musk, the new rocket will open a whole new series of opportunities for both SpaceX and the American space program.

It’s more capability than any vehicle in history apart from the Saturn V. It opens up a range of possibilities for government and commercial space missions that simply aren’t present with the current lifting capacity.

The rocket itself will measure in at 227-feet, still over 100-feet shorter than the Saturn V, which stood at 363 feet tall. The rocket would also be relatively cheap, costing between $80M and $120M to construct. Your typical space shuttle mission costs around $1B to fund.

I am torn on this. On one hand, I long to see the American space program continue on and I think that the only way real progress could be made is if risks are taken. On the other hand, the idea of a privately held company being in the driver’s seat is not something I feel quite comfortable with.