A Hands-On Preview of the Sony S Tablet 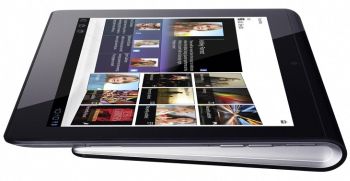 The reviewers at Engadget have gotten some serious hands-on time with the Sony Tablet S, one of the two tablets that will reportedly be released into the consumer market in mid-September.

In case you didn’t already know, the Sony S tablet has a unique design, resembling the tapered shape of an airplane wing. However, the design was reportedly inspired by a folded magazine.

Though the hardware on the Sony S is finalized, the software shown in the review video isn’t “final” — which is a relief, since a lot of it seems to have limited functionality at this time.

Sony also has another tablet scheduled for September, the “S2”, which has dual touch-screens. I wonder how Sony’s tablets will measure up against the rest of the tablet market?