Sony copies ‘Get a Mac ads’ 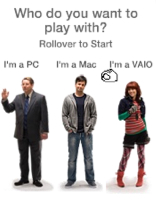 After almost a year of delays on their mammoth of a game console and a recall of over a million burning laptop batteries, Sony has decided to make themselves “cool” again by cloning Apple. Apple’s now infamous “Get a Mac” ad campaign is being duped by Sony Australia’s C-Series VAIO, which claims to be a “non-PC PC.” The VAIO ad features the typical ‘dressed up’ PC and the ‘laid back’ Mac, but has a young women in stylish clothes as the VIAO. The strangest part of this new campaign to us is that a VAIO runs Windows XP, making it a PC. Don’t tell Sony that though, they’ve got a lot of making up to do after their disastrous year. — Zach Wilt

A PC in Mac’s Clothing? [MacUser]