TorrentFreak has a great article up on the history of one of the stupidest forms of DRM ever: The Lenslok. A small plastic device with multiple prism-like lenses, you’d hold the device up to the TV when a game prompted you to enter a secret message. Here’s an example of how this piece of shit was used:

The first game to use the Lenslok DRM was the ZX Spectrum version of the hugely successful wireframe-3D shoot ‘em up, ‘Elite‘. But of course, we’re talking about DRM here so yes, you guessed it, it caused lots of problems for the legitimate users. As each version of the Lenslok device was unique to the game it sought to protect, sending out the incorrect Lenslok device to around 500 buyers of ‘Elite’ wasn’t the best move made by the publisher, ‘Firebird‘. None of these people could play the game, but probably had an interesting experience for a few hours trying to work out how to use the prism. With no Internet forums to voice their anger, there were many complaints in the computer magazines of the day.

The final nail in the Lenslok coffin was its inability to work with anything other than a tiny portable TV, as the on-screen input window would otherwise be bigger than the device itself, rendering it useless.

Essentially, this arcane device was worthless and messed with users simply trying to play a video game. Imagine playing a game like Grand Theft Auto IV and having the game freeze in the middle of a mission so you can hold up a device to your TV. I highly doubt this would fly with anyone nowadays. 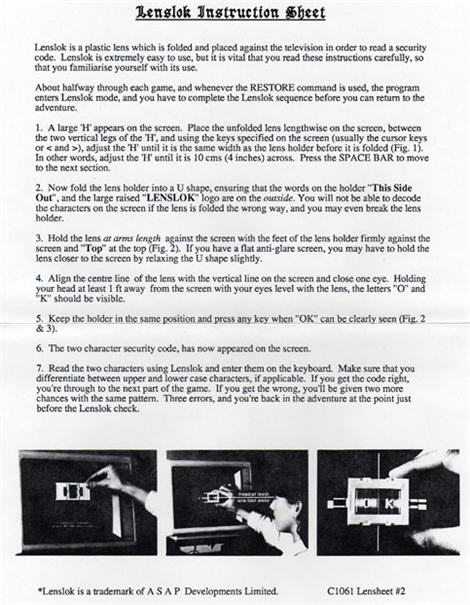