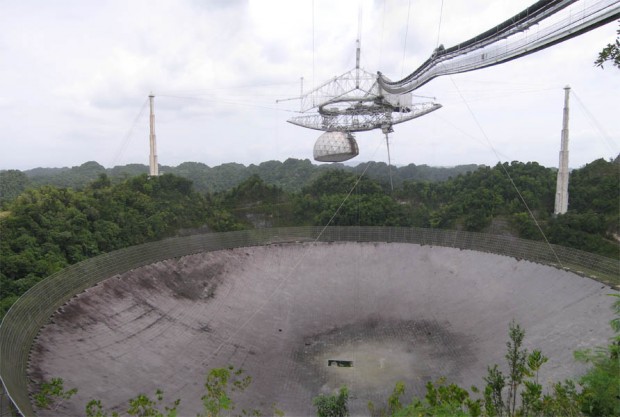 The science of the Search for Extra-Terrestrial Intelligence, or SETI, began in 1960 when astronomer Frank Drake inaugurated an intensive radio scan of selected stars, listening for the structured signals that would indicate the presence of intelligent life elsewhere in the universe. Fifty years later, no evidence of such intelligent life has been observed (evidently, urgent messages from the Pleiadeans don’t count). The SETI Institute in Mountain View, CA, is planning to observe this rather sobering record of achievement with a fresh round of sky-scanning:

To demonstrate the advances in SETI over the past half century, on November 5, 2010, astronomers in Australia, Japan, and Korea will begin observations for radio and laser signals from civilizations… followed over the next day by SETI searches in Italy, the Netherlands, France, Argentina, and the United States. Additional observations will take place in late November 2010.

SETI is serious science: its methods are precisely documented, its results painstakingly peer-reviewed. But as the above paragraph indicates, it’s a field with curious standards when it comes to “advances.” As with the search for Atlantis and the Loch Ness Monster, it would seem to an outsider as though only one kind of result would count.

Unlike these pseudofields, SETI has much to get excited about: the growing list of recently-discovered planets beyond our solar system; new understandings of the nature of life’s origin here on Earth; and the similarity of extreme terrestrial habitats to environments observed elsewhere in the universe; all point in the direction of when, and not whether, we will make contact. And yet a silence still pervades.

As a field, SETI is beguiling: although its extremes lead invariably to speculative fancy and even to religion, it also formidably challenges some of the fundamental assumptions of science. We should observe a universe teeming with life; near and far, however, we find only sterile silence. The considerable challenges of this “result,” known as the Fermi Paradox, to SETI and science in general are plumbed by astronomer Milan M. Cirkovic in a fascinating paper published last year at arxiv-astrophysics:

It should be noted right at the beginning that it is not entirely surprising that several scientific hypotheses for resolving (the Fermi Paradox) have been formulated, in a qualitative manner, in the recreational context of (science fiction) art; astrobiology is perhaps uniquely positioned to exert such influence upon human minds of various bents. After all, much of the scientific interest in questions of life beyond Earth in the 20th century was generated by works such as Herbert G.Wells’ War of the Worlds, Sir Arthur Clarke’s 2001: Space Odyssey, or Sir Fred Hoyle’s The Black Cloud.

Cirkovic’s full paper is of the length that usually gets tagged tl;dr in Internet culture. But it’s worth savoring for its compelling survey of a field that swiftly moves from rigorous statistical theory to challenging questions of astronomical observation to speculative fiction.