Samsung whips it out with X830 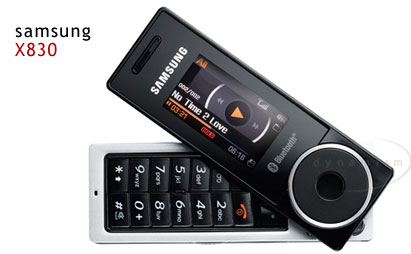 Samsung’s new X830 cell phone has a look not shared with many phone on the market today; it has a switchblade-like design, which might not be the best design in the current times. You might pull out this phone, flip/slide it open, and some woman will pepper spray you in the face thinking you have a switchblade. The X830 is a very media-oriented phone, with 1GB of memory and a 1.3 megapixel camera. It has an click-wheel interface which is very similar to, you guessed it, a Zune. The features on the X830 don’t stand out too much compared to other new phones, but Samsung is hoping to hook people with the design. However, with a $419 price tag, it’ll probably be hard to hook anyone with the design unless they like being hassled for possessing a concealed weapon. The X830 by Samsung doesn’t make the cut (get it, switchblade ”cut? Haha so funny) with average features and an apple-like price tag. — Nick Rice