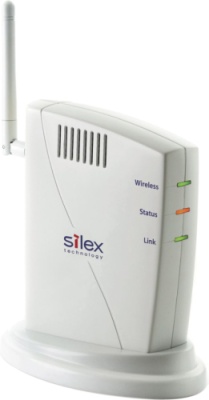 Now, everyone knows about wired device servers, right? You have to have an ethernet cable routed to wherever you want the server to be, and then to wherever your devices are. But how about wireless device servers? The silex technology SX-2000WG is one and the only wire needed is the power adapter. With claims of up to 8x USB 2.0 speed and supporting up to 15 devices, can the SX-2000WG really deliver? Read on to find out.

Immediately after opening the SX-2000WG, I noticed a couple things that anyone would notice: it’s very light, and there’s only one USB port in the back. Now, the weight issue isn’t really a problem, it’s just a fact about the device. As to the single port, this could be surprising to a consumer expecting to reconnect their house’s devices with one product. After checking back to the product information, it does say “15 (including USB hub)”, so do deception was involved, just my incorrect assumptions.

So how well does it function? After setting it up (plugging in the power cord) and installing the necessary application onto my desktop and laptop, the SX-2000WG recognized my wireless network without a hitch. One little problem I did run into was when I installed the software onto my laptop, it didn’t recognize the device plugged into the server, but the updated software on the silex site fixed that.

Now onto actually plugging in devices. USB 2.0 hubs aren’t exactly expensive or hard to come by, so there was no problem there. After plugging in my multitude of USB devices (but not quite 15), the application on both computer recognized each device separately and gave the option to connect whatever device I wanted to. (Note: A device can only be connected to one computer at a time). Connection was simple and fast, and I was off communicating with my devices.

With my Zune, I noticed no lag when I asked my computer to perform actions and transfers. When I was using a USB flash drive, I don’t think that it lived up to it’s 8x faster than USB 2.0, but that might be due to other network issues. I understand if it’s faster than USB, but not 8x faster. So all in all, I think that the SX-2000WG works great, and I use it almost everyday transferring data between my desktop and laptop. While the SX-2000WG didn’t surprise me with any amazing functions, it did it’s job without causing me to get a migraine in the process. –Nik Gomez